Why does the Litho game object behave in a strange fashion when I attach a box collider to it? It sort of moves towards the camera and then repositions itself back to the original position. Could you please try adding a Box Collider and run the demo scene in the editor once?
This only happens when you use the mouse.
Try connecting and using the Litho device. It works fine.

- I tried a variety of configurations of box colliders attached to the Litho GameObject, but I wasn’t able to reproduce the issue you’re describing.

- If you could attach a video or gif of the Scene and Game views exhibiting the problem, that could be very useful, or perhaps just explain more specifically how you have it configured in the Hierarchy?

- This might be because of how the Litho Emulator (the thing that lets you use the mouse in the Unity Game window) is implemented. It’s raycasting from the camera to the scene, to determine what to point at, but because Litho points from a different location, the raycasts can be misaligned. This assumption is currently a limitation of the Litho Emulator, and can lead to some strange edge-cases under certain conditions.

- That being said, I’m still curious about your case, as I’m unsure whether it’s the same problem…

Here - https://www.youtube.com/watch?v=YkzytZRBtDE&feature=youtu.be
I tried applying the collider to the Litho object in the sample scene and it actually works fine. I only have this issue in the sample scene that I created. Strange. It works completely fine with the normal Litho Device.

- Could you send me a screenshot of the expanded Hierarchy (especially pointing out which object the collider is attached to)?

- Are you clicking and holding the left mouse button to trigger this issue? 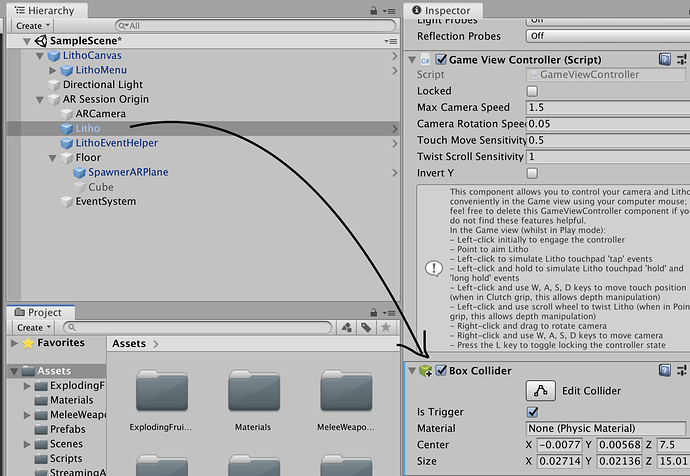 . I have drawn a diagram to explain it: 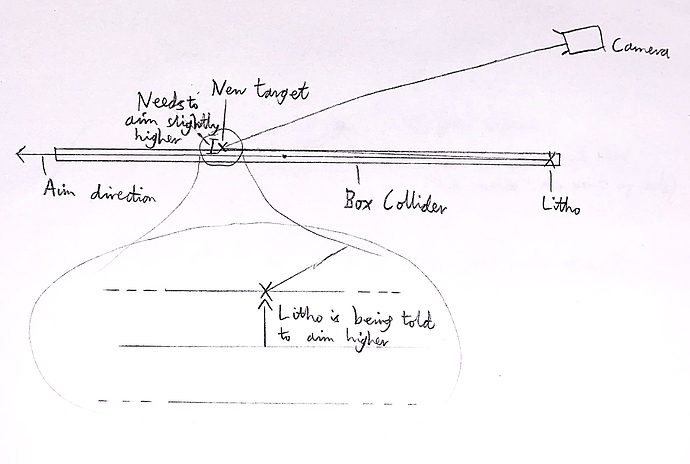 - You can fix this by setting the box collider settings as shown below (this ensures the top of the collider is lower than the aiming direction/ ray of Litho, which prevents the issue).

- Could you explain what it is you’re trying to achieve by attaching a collider to Litho? This could be an important design point for the SDK; does the point below explain an alternative method to achieve the same thing?

Let me know how you get on

The reason why I am attaching a collider to the Litho is because I want it to act like a sword that could possibly slice through any game object in the scene. I could not figure out a way to implement a cutting algorithm so instead just used exploding fruit assets that had that cool explosion effect. I just called the Explode() function as soon as the Line renderer collides with the fruit.

Is the Litho SDK available for open source contributions on GitHub? Would love to make some contribution to Litho in terms of development. There are some more ideas that I have actually.

- Have you tried the method I mentioned above involving the Manipulable component?

- The SDK currently isn’t available for open source contributions, however you are more than welcome to open new topics here in the forums to post any interesting or useful scripts you make!